It’s beginning to look a lot like Christmas in the heart of the capital, now that Claridge’s has revealed its highly anticipated designer tree. This year, it has been given a quirky twist by fashion maestro, Karl Lagerfeld. Who better than the creative director of the Chanel and Fendi fashion houses, to add a touch of monochrome magic and luxe sparkle. You only have to look at the current Chanel collection for dazzling fabrics and one of the party season’s most coveted items, Chanel’s knee-high glitter boots.

This is the eighth year that Claridge’s has invited an iconic name from the world of design to create a unique installation in their own distinctive style. Previous guest designers have included Alber Elbaz, Dolce & Gabbana, Apple CEO Jony Ive and the industrial designer, Marc Newson. 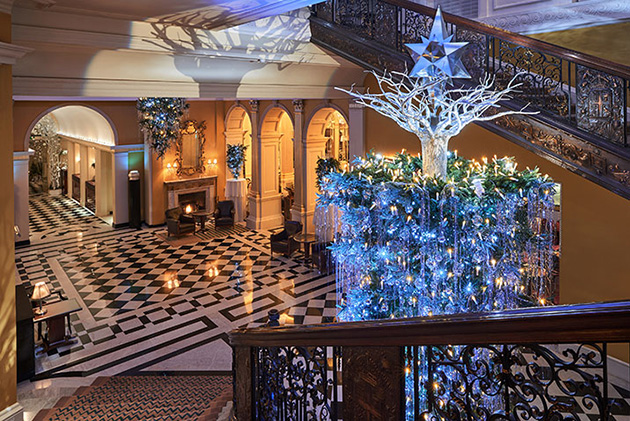 For his design, German-born Lagerfeld has turned the notion of a freestanding tree on its head – quite literally – by hanging it upside down and high above the Claridge’s’ Art Deco staircase. And in case you were wondering, the tradition of hanging a tree from a ceiling by its base has its roots in antiquity.  As legend has it, the English monk Saint Boniface who went to Germany in the 7th Century to preach the gospel, first discovered this practice there. It is said that Boniface used the triangular shape of the Fir tree to describe the Holy Trinity of God the Father, Son and Holy Spirit, and by the 12th Century the fad for inverting trees had spread to Central and Eastern Europe as a symbol of Christianity.

Meanwhile, back in 21st Century Mayfair, Karl Lagerfeld’s magnificent spruce measures 16.ft tall and is festooned with metallic-coloured foil streamers and snowflake decorations. At its top, or should that be trunk, sits a large silver star, while at its foot lies a circular shearling rug. “Christmas trees are the strongest ‘souvenir’ of my happy childhood,” says the designer of his latest creation. 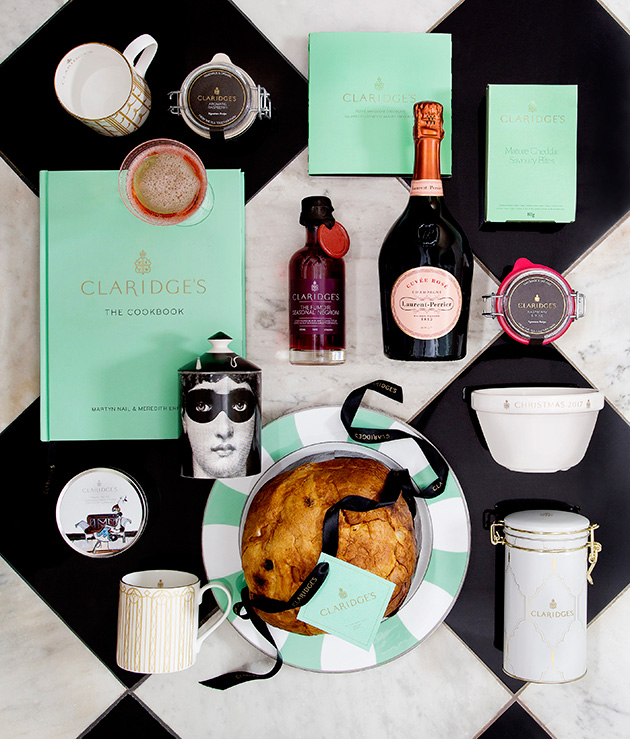 Elsewhere at Claridge’s, for the first time in its 151-year-old history, the celebrated hotel has created a series of Claridge’s Christmas hampers, packed with the same gastronomic treats that visitors can enjoy in its Foyer, Reading Room and Fumoir bar. Three sizes of lidded willow baskets are available to purchase: the Davies Hamper (£295) containing aged Negroni and a signature Christmas pudding amongst other goodies. Then there is The Brook Hamper (£495), which includes a bottle of Laurent-Perrier La Cuvee Brut and Pierre Marcolini Caramel & Praline Chocolate Squares. And finally, The Mayfair hamper, the largest of the three, which includes a Dundee Cake and a copy of the recently launched Claridge’s Cookbook. The latter features the Lobster Wellington, which was created for 2016’s Christmas tree launch party. Or if you prefer, skip straight to the cocktail section. Happy Christmas!